We attended three events for SIFW 2018: Connecting Generations. Here’s our take on each:

The week leading up to the launch of Scottish Interfaith Week was an extremely busy time at Interfaith Scotland HQ – and I loved every minute of it. I was looking forward to attending my first SIFW launch and that coupled with the fact that this was my very first time in Aberdeen, I was not disappointed. Before the launch, we were taken on a tour of 3 local places of worships; the Synagogue, the Mosque and the Quaker Church. We learned a lot and it was very interesting.

The launch itself was set to start at 5.15pm at the local Town Hall. The venue was breathtaking. One could feel the history seeping through at the magnificent hall. The setting was perfected by the beautiful live music that accompanied our dinner. After kick-starting the event with an introduction to the theme “Connecting Generations” by the director of Interfaith Scotland Dr. Maureen Sier, we had the notable Lord Provost, address the gathering. There was Indian Classical dance- Bhratanatyam performance and a very lively choir and band. Various speakers addressed the theme. One particular story stood out to me; the local mosque and a church were neighbors in Aberdeen. One day, due to lack of space, a few of the Muslims were praying outside the mosque. Seeing this, the priest from the church invited them to pray in the church hall. Ever since, the church and the mosque have shared a common hall between them. I was extremely moved by this story. This is what interfaith is and what it wants to achieve. If everybody was accepting and understanding of every other faith or any person’s lack of it, wars in the name of religion would cease to exist. After all, we all just want to live together in this world in peace.

I was excited to be in Aberdeen for the launch of the interfaith week 2018. A highlight from this trip for me was the visit to three local places of worship: the Synagogue, the Mosque and the Quaker Church. This was my first experience of being in a synagogue and I knew very little about Quaker practices.

From the synagogue visit, I was able to draw parallels in practices between religions – like direction of worship, different columns allotted for individuals doing different roles during the service, expectations of people in old age etc. The most fascinating part was to see the 250 column Hebrew scroll (image below) containing the five books of Moses (fun fact: the rolled out scroll is the size of a football pitch) which is read out over the period of a year.

Though I have been to mosques before, what struck me the most at this mosque was the close communal harmony with an adjacent church. In a time where there is so much hate crime around the world, a physical extension linking the church and mosque came across as a pioneering example of interfaith harmony. During the subsequent launch event at the Aberdeen Town Hall, it was an honor to hear the first-hand account of the background to this from Rev. Fr. Issac, who was the man behind the initiative.

The Quaker meeting house experience was quite novel. Unlike the nature of practices in other religions, it came across that community decision making and role of meetings took center stage in Quaker practices. It was also interesting to note the wide diversity in the content being discussed in the meetings.  Thanks Interfaith Scotland for providing this opportunity to learn about other faith communities and their practices. 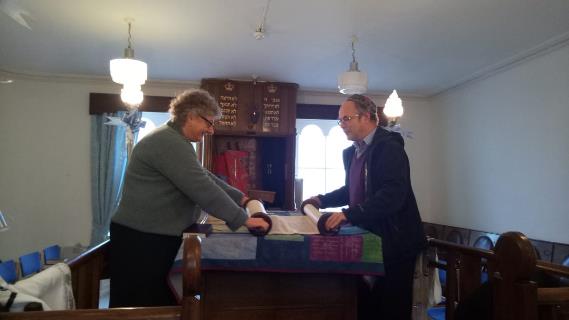 Caring for the Earth and its People

On Wednesday 14th November, the St.Mary’s church hosted a talk on the topic “Caring for the Earth and its people”. Two speakers, Sreevas from the Hindu community and Hyder from the Muslim community, were invited to talk. About 15 people were present at this intimate gathering.

It began with Sreevas’ talk highlighting the ways in which the Hindu scriptures and practices talk about how to care for the environment and people. He spoke about taking care of rivers and soil through religious customs and prayers and how there is an emphasis on taking care of others through charitable work like donating food, clothes etc.

Hyder’s talk was different in the sense that he played a game. In the game members of the audience were asked to come up with an act that potentially be hurtful to environment or people. These left stains on the heart. Then we had to suggest redemptive actions which would wash away those stains. Everyone enjoyed it.

After, both speakers were engaged with the audience in Q&A session. They received questions about religious calendars, agricultural festivals, personification of God in Islam, Effect of industrial revolution in religious practices, Darwinism and religion, use of nature in everyday life practices. It was a thought provoking session. As a practicing Hindu I learned so much and asked myself questions I never thought to ask. 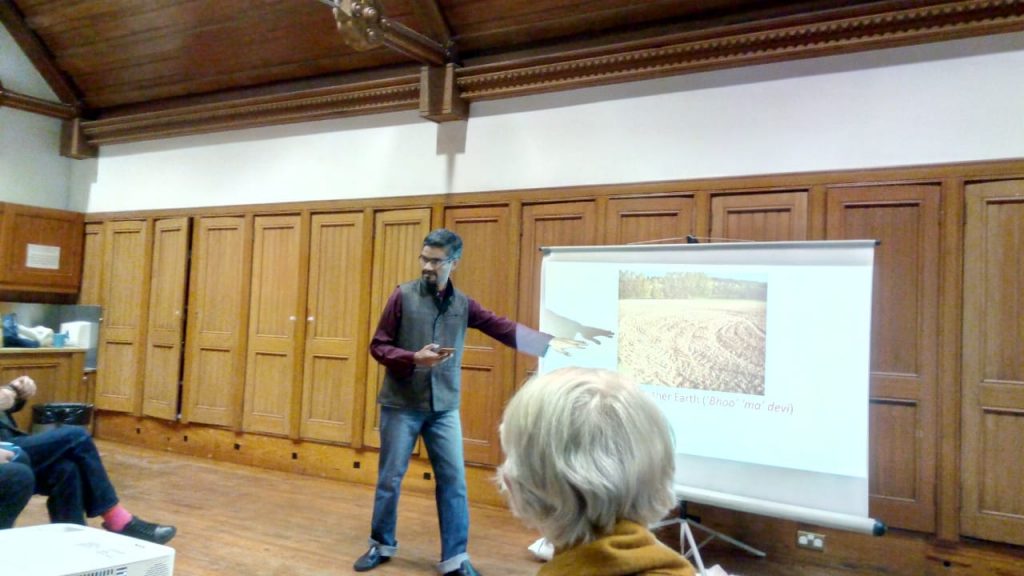