The Fife Interfaith Group, sponsored by Interfaith Scotland, held their annual Interfaith lecture at The Church of Jesus Christ of Latter-day Saints, Kirkcaldy, on Wednesday 13th November 2019. Mike Haines O.B.E. and founder of “Global Acts of Unity” gave the lecture and spoke about his brother David who was captured in Syria by terrorists whilst on a humanitarian mission and publicly executed after several months of imprisonment and torture. Mike spoke of his fight, not against the terrorists themselves, but against all forms of extremism and hatred.

The audience of over 50 people consisting of many faiths and beliefs were moved by his passionate plea for tolerance. His mantra “If we hate, they win” was repeated throughout his presentation.

Bishop Dale Black, representing the local LDS congregation said of the event, “The topic of love, tolerance, and forgiveness was the overwhelming message”.

Alisha Ahmed, Aged 11 from Kirkcaldy High School said she attended this event as part of Interfaith week and found it “emotional and touching”.

Joyce Bloomfield, a local LDS church member, remembered hearing of David’s death in the news was touched by Mike’s honest, uplifting, and humble account. “It gave me a desire to serve and make a difference in my community” she said.

Usman Saeed later said of the presentation, “it is so refreshing and inspiring that Mike is going out there to all the communities up and down the country as well as abroad to show how important it is to reject all forms of hate fuelled ideologies whether it be daesh or the far right”.

Most of the attendees were able to linger afterwards to socialise and enjoy the refreshments.

Iain Liston, Chairperson of the Fife Interfaith Group, expressed his desire to increase the influence the Fife Interfaith group had in the community and encouraged the attendees to volunteer in whatever capacity they could to support events like these. “I believe we can go back to our congregations, organisations, and social groups, armed with the motivation to make the world a better place, one community at a time”. 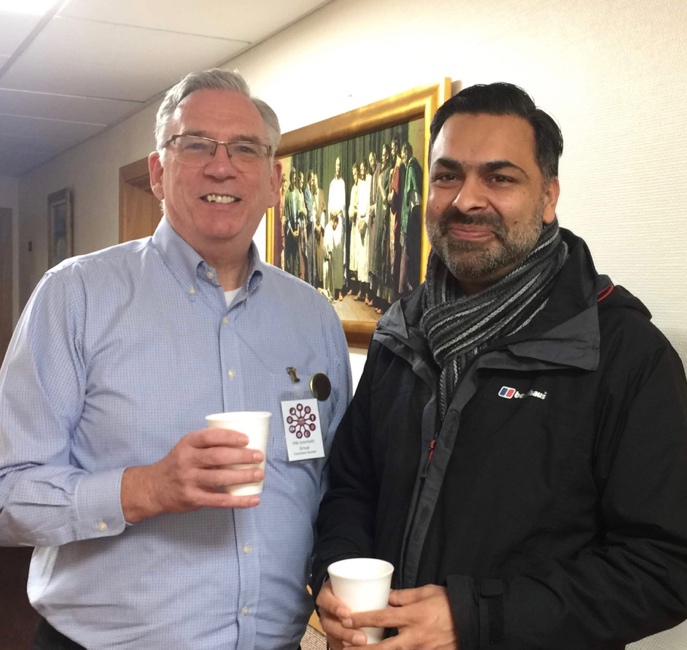