From Dancing to Dominoes – #SIFW18 in the Shetland Islands

Bring on the dancing girls… and there they were, from the Philippines to Shetland – participants from a variety of ages putting on a colourful spectacle, performing for our enjoyment, and you could really feel from the performers themselves and the entertainment of all who attended the evening.  This was followed by three songs, ‘God’s Colours’ about diversity, also inadvertently appropriate, ‘Lets Work Together’ and ‘The Earth is but one country’. 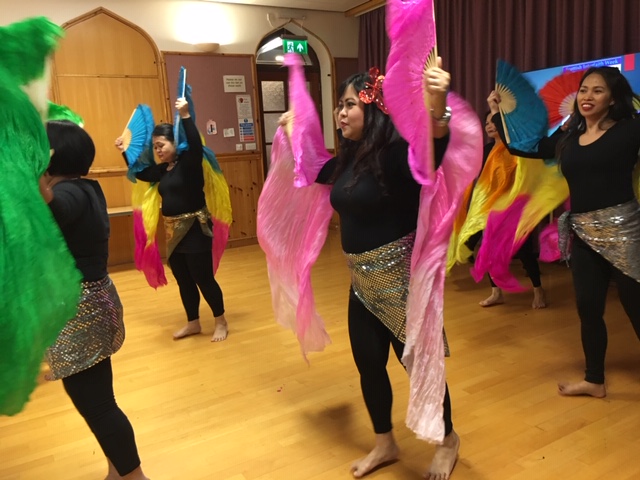 Entertainment over and it was time for business.  The AGM of Shetland Interfaith was being held. A simple eloquent presentation of Interfaith Shetland’s activities from tackling ‘hate speech’ to taking interfaith into schools and a whole spectrum of stuff in-between was given. Considering the few in numbers and the busyness of peoples’ lives, the work in promoting and participating in interfaith activities over the year has been quite considerable.

After the entertainment and the AGM it was time for interfaith dominoes, a game created by the Church of Scotland. This gave an opportunity for people to engage in dialogue and it did just that. There were five people in each group – ours had only one young person who was happy to contribute and seemed confident, not overwhelmed by being surrounded with people considerably older, as one might expect (a fanstastic example of Interfaith Dialogue working well to Connect Generations).

So the question is – how do we learn from each other ? Well one way is through dialogue. The older folk have experience – and maybe even wisdom – while the younger folk have ways of looking at things with new approaches to older ways of doing stuff. Both have to exercise patience, consideration, and all those Godly virtues which bring out the nobility in us. I know we know this already; the question in my mind is how do we attract young people in the first place at a local level? Anyway I digress.

Interfaith dominoes are a great tool for facilitating dialogue and educating us in various faith traditions. It answered some of the why’s and explained the purpose behind some of traditions, offered opportunities to better understand faith and cultural diversity, and it demonstrated to me we are not all that different.

‘All the different religions of God that have risen on the face of the earth have one purpose: to educate man and to inform him of the spiritual, the luminous, the divine, so that he may partake of heavenly spirit and find eternal life, show forth the virtues of mankind, and from a world of darkness enter a world of light.’