Perth was the chosen venue for the launch of the Scottish Interfaith week, which to me seemed an ideal choice, being in the heart of Scotland. The afternoon’s event was the beginning of what I am sure will be an amazing and inspiring week of interfaith events all over the country. This year’s theme is ‘Eat Share Love’ – three basic but vital actions we should have in everyday life.

The afternoon began on the theme of ‘Eat’. We were treated to a generous buffet as we arrived as well as tea and coffee. Then for the icing on the cake – there was a very special chocolate for every attendee, kindly donated by the Highland Chocolatier of Grandtully in Perthshire. Not just any chocolate but the two time winner of the chocolate truffle of the year award!

After a warm welcome from the Lord Provost we were given an introduction by the Chair of Interfaith Scotland, Alan Kay. They portrayed a strong sense of warmth and welcome in the room, and a real belief in what interfaith is about; building links and bridges between various communities of different faiths. Dr Maureen Sier then gave us a potted history of Scottish Interfaith Week and the relevance of the theme ‘Eat Share Love’. They seem such simple words and actions but in reality there are many people around the world who do not have these readily in their lives. We cannot simply take them for granted. They also bring up many discussion points in different religions – take for example Eat, the various rules on food in different faiths and how food is used for traditions and in celebrations.

‘Share’ was also a big part of the afternoon in Perth. We were treated to some beautiful Persian music by the amazing Musicians in Exile who came from Glasgow to play for us and share their culture. Musicians in Exile is a fantastic initiative which provides asylum seekers and refugees who have been musicians in their own country, with the instruments and rehearsal space to perform again as musicians.

For me Tracey Robbins’ talk on the Eden Project summed up the theme for the week. It is an amazing organisation which encourages people to love and appreciate nature and our neighbours around us. In particular she mentioned the Big Lunch, an initiative which encourages people to have an event in their neighbourhoods where people can eat together and get to know each other. Loneliness being a big issue in modern life today, she talked about the Big Lunch being a way to combat this and encourage people to appreciate and support others around them in society. I loved her saying: ‘Permission for Snow’. If it snows and people are stuck/snowed in, the normal human reaction is to help: help move cars, help dig people out of their homes, help provide food and supplies. She encouraged us to do these things and show love to our neighbours all the time/everyday, regardless of the weather!

Lesley Wilson read an amazing and thought-provoking piece of work she had written called ‘The Land that Forgot’. It really made me think we need to appreciate everything in nature around us – lest we take it for granted. We live in a beautiful world. 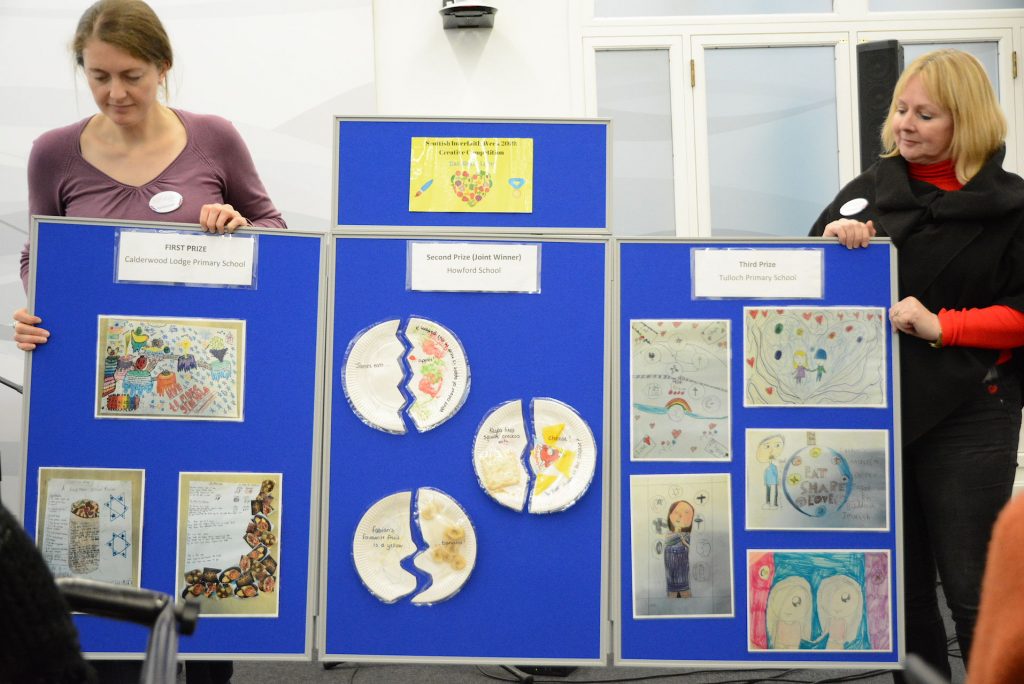 Near the end of the afternoon the winners of the Scottish Interfaith Week Art Competition were announced. With 60 entries in total it goes to show the fantastic work with Interfaith Scotland does in raising awareness and respect for people of different faiths. The winning entries showed a wide variety of ideas from poetry to recipes to a game of senses where different food types were displayed on plates for you to decide the contents by smell and texture!

Definitely one of the highlights of the day for me was speaking to other people at the event, finding out a bit about their backgrounds and how they became to be involved in interfaith. For example a lady who works as a prison chaplain who told me about her visit to Ghana and the positive relationships between the different faith communities there, with the religious leaders of the communities being genuine close friends. I met another lady who was the Chair of Aberdeen Interfaith Group and heard about the events which happen there.  The variety of people of different faiths was clear to be seen over the afternoon in Perth. Although there isn’t currently an interfaith group in Perth the idea was that perhaps after this launch event, something could be started. ‘Love’ and respect was clear to be seen during the afternoon which for me is the wonderful thing about Interfaith; a really acceptance and respect for others, no matter what the background in culture or faith they may be from.